[How To] Freestyle Riding | Part Two: Hów exactly do you start? 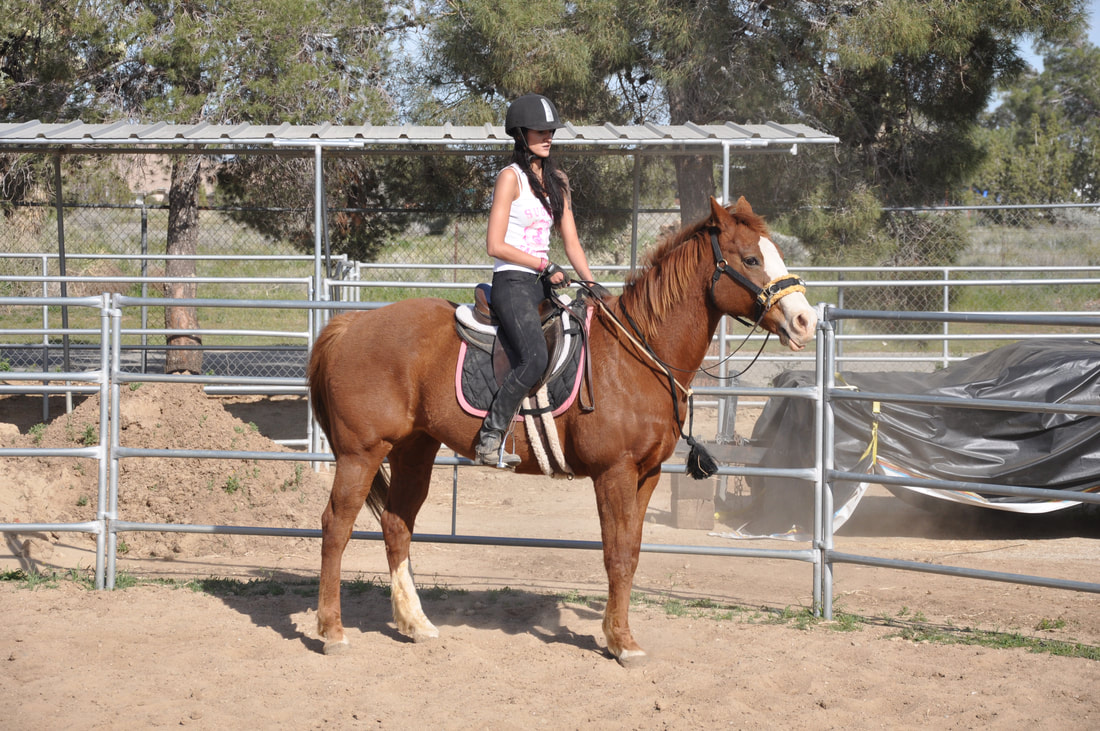 Do you know that feeling, when you see something so incredibly awesome, beautiful and inspiring, but somehow out of reach? You start questioning yourself and tell yourself that it's not for you. What if your curiosity could lead you to your passion? When I pursued my curiosity, my passion flowed and unfold naturally and lead me towards the feeling of Freedom.
For me, and for the Horse.

So, with that being said, let me show what the first week of our Freestyle Journey
​looked like!

Because our level of liberty/groundwork/playing with chi/energy is already at a high level, I simply started riding her as soon as we had a saddle that fit her. She already knows the cavesson from groundwork stuff, so I introduced this as a riding halter a while ago. She had absolutely no problem with the transition, although I gave her some extra time to get comfortable with it, just to be sure.

I started in the round-pen, since that is the place we're both very comfortable and where we've spent a lot of time together.

That's when I noticed her old 'bad' behavior was starting to show again, in the form of being impatient. When JP gets impatient, or bored, she used to leave the 'conversation' and do something of her own like sprinting or crow hopping. Naturally I wanted to prevent that behavior from taking over again, so decided to speed things up (after I made sure she was completely relaxed and up for it). While doing that I reminded her of the relaxing work that we did, helping her to understand that waiting can be a reward too.

This worked like a charm, we practiced linking all groundwork and liberty voice commands to seat cues and after just two rides of 20 minutes I introduced the Neck Rope. When I was absolutely sure she knew the One Rein Stop bitless, responded to my cues and was accepting the Neck Rope, we went 'Trail Ride Praciticing" just walking around the property of the ranch, passing tarps, machinery, trailers, other horses, etc. Again, I just wanted her to relax and have a good time with me. Every now and then I let her graze (because NOW is the time!! We usually don't have grass growing anywhere) and then I would let her know we were taking off again and she responded politely by taking one more chew (she knows she can have one more after I've let her know we're leaving) and walking off.
She was in heat that day, so (as always) she was extremely loud and mean towards other mares. Usually her deep-rooted instincts take over and she kind of forgets that I'm still on her. So before I even got on her, I walked with her to work on staying with the conversation instead of being rude and give in to your womanly urges (lol).

Watch what our little stroll looked like in the video below
When we reached the point where she was feeling confident and relaxed while being responsive towards me, it was time to quit. Later that week we practiced the same thing, we trotted a little and as a reward, she got a refreshing shower afterwards.

The next session - two or three days later - I saddled her for a short, basic session in the round pen. Everything went perfect, so I introduced the Neck Ring; a more stiff rein made out of lariat rope and adjustable (of course, mine is STUCK!, so still working on that). I bought it two years ago, after I read an article by Linda Tellington-Jones (from the 'TTouch' method) that made a lot of sense. They're like trainingwheels, for horses that need a little something in-between to help translate the conversation from bridle, to neckrope (and eventually, maybe, to nothing). I find them really useful for asking the horse to turn or bend, when they're responding to the Neck Rein you can basically translate everything to the Neck Rope (with lighter, smaller cues).

I let her walk around, saddled and with the Neck Rope ánd the Neck Rein, I let her graze and as expected she got a little bit spooked when the Rein softly dropped down her neck, towards her ears. We played with that and after about three minutes she didn't even care if they dropped down on her ears.

Fast forward another three days, and it was time for our first ride with just the Neck Rope. Again, in the round-pen and after a short groundwork session to get into the same flow.
As soon as I got on her, I felt her waiting for the next question. She gave me that feeling the whole ride, responding to every cue even when I only used the Neck Rope. So I simply couldn't resist to clip off my reins and just go for it!

We practiced transitions and I wanted to make sure she knows "Whoa", before I was going to take her to the arena next time.

​Next time: Our first bridleless ride in the arena!